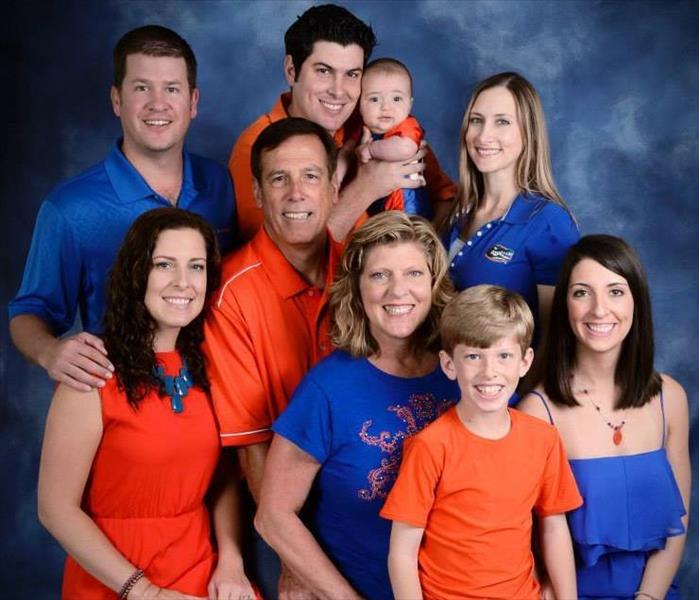 Most people see SERVPRO and automatically think of a faceless and large corporation.  Many do not know that while SERVPRO is a nationally known corporation, its over 1600 franchises are all individually owned and operated.  This, in part, is what makes us better than the rest.

One of SERVPRO's biggest advantages over its competition is that no job is too large or too small for us.  Due to the fact that we are a corporation, we have access to unlimited supplies.  If a large loss occurs, we can call in as many "sister" franchises as we need.  SERVPRO even has both a Large Loss team and a Storm Team for such cases.  On the other hand, as before stated, SERVPRO franchises are all individually owned and operated.  So by using a SERVPRO, you are still keeping it local and supporting your community.

SERVPRO of Alachua County West has been servicing Gainesville and surrounding areas for the past 20+ years.  However, the current owners, Mark and Becky Raymond, did not purchase the business until 2007.  Mark Raymond graduated from the University of Florida and worked over 30 years in the retail industry before he stumbled upon SERVPRO.  He then worked as the marketing representative and progressed his way to general manager working for the SERVPRO of Arlington in Jacksonville, FL for nearly 8 years.  When word came out that the SERVPRO of Alachua County West franchise was for sale, Mark jumped at the opportunity.  Not only was this a franchise that he could believe in  but he had also always wanted to own his own business.  In 2007, this dream was made a reality.  He moved to Gainesville, FL with his supportive wife, Becky, and two of his four children, Julianne and Joshua Raymond.  Mark and Becky's eldest son, Jason, already had around four years of previous experience working for SERVPRO.  So once the franchise was purchased, he put his knowledge and experience to use as their Production Manager.  Their daughter, Julianne Raymond, is their current Marketing Representative.

Altogether, the Raymonds work to make it "like it never even happened" for you.  SERVPRO of Alachua County West is therefore not only a brand you can trust, but a family you can trust.