A Brand and a Family You Can Trust 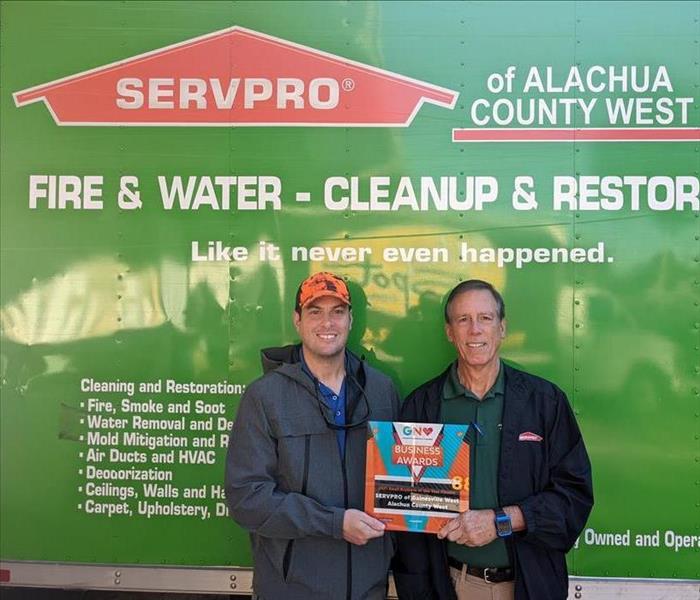 Jason (left) and Mark Raymond accept an award in small business at the Greater Gainesville Chamber of Commerce Business of the Year Awards.

Although SERVPRO itself is a large, national corporation, each franchise is individually owned and operate by your neighbors or friends. And the same can be said for SERVPRO of Gainesville West and Alachua County West. You are keeping it local and supporting your community when you use our company.

SERVPRO of Alachua County West has been serving Gainesville and surrounding areas for the past 20-plus years. The current owners, the Raymond family, purchased the business in 2007. Led by Mark Raymond, who is no stranger to Gainesville, having graduated from the University of Florida, worked at a SERVPRO franchise in Jacksonville, Florida. He started as the marketing representative and worked his way up to general manager, working for the SERVPRO of Arlington in Jacksonville for nearly eight years. When word came out that the SERVPRO of Alachua County West franchise was for sale, Mark jumped at the opportunity. Not only was this a franchise that he could believe in, but he had also always wanted to own his own business. In 2007, this dream was made a reality. He moved to Gainesville with his supportive wife, Becky, who would serve as co-owner, and two of his four children, Julianne and Joshua Raymond. Mark and Becky's eldest son, Jason, already had around four years of previous experience working for SERVPRO. So, once the franchise was purchased, he put his knowledge and experience to use as their production manager. He continues to serve in that role today. At one point, Julianne served as marketing representative, making connections throughout the community. She currently serves a marketing consultant to the company.

The Raymonds care deeply about the people and community they serve. They are your neighbors, your friends, your trusted remediation company.

The Raymonds, along with a great team beside them, work to make it "Like it never even happened," for you. SERVPRO of Gainesville West and Alachua County West is not only a brand you can trust, but a family you can trust.