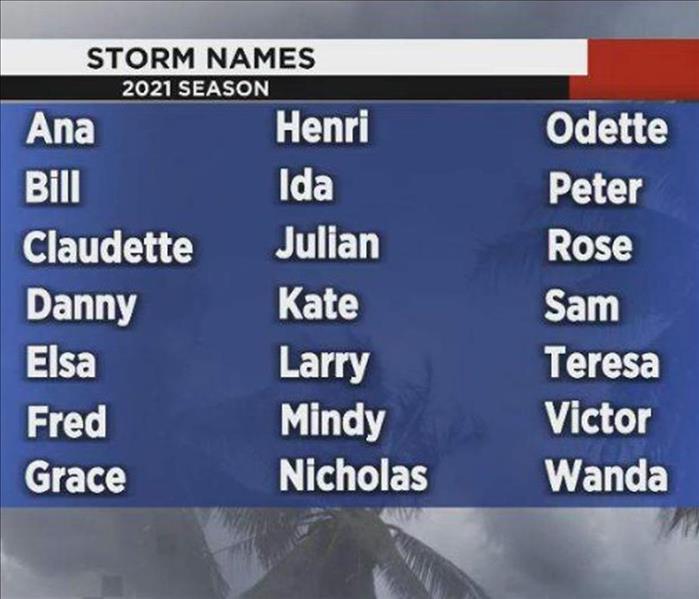 Every year when hurricane season is in full swing, we have the chance to get to know the names and remember the destruction of a new set of super storms.  With names like Andrew, Irma, Katrina, and Michael we come to know them and remember them for years to come, but did you ever wonder just how they got their names?

Years ago, it was realized it was much easier to quickly identify storms in warning messages by names which is far easier to remember than technical terms or latitude and longitude.  It also heightened interest in warnings and contributed to community preparedness.  In the beginning storms were named arbitrarily.  An Atlantic storm that ripped off the mast of a boat named Antje became known as Antje’s hurricane, but then in the mid 1900’s the practice began of using female names for storms.  By the late 1900’s a more efficient naming system began with an organized list arranged alphabetically from A to Z.

Since 1953 Atlantic tropical storms have been named from lists originated by the National Hurricane Center which are now maintained by the international committee of the World Meteorological Organization.  In 1979 men’s names were introduced to alternate with the women’s names. Each year, a list of 21 names is used, but does not include less-popular letters, including Q, U, X, Y and Z. And the Atlantic hurricane list is compiled of derived from English, Spanish and French cultures, due to the countries that surround the Atlantic basin.

The only change to these lists is when a storm is so deadly or costly that for sensitivity reasons it is retired from the list and replaced.  If that occurs, at the annual meeting by the WMO Tropical Cyclone committees, the name is stricken from the list and another name is added based upon the region the list is derived from.  Infamous storm names such as Laura, Eta, and Iota (USA, 2020), Dorian (USA, 2019), Michael and Florence (USA, 2018) Mangkhut (Philippines, 2018), Irma and Maria (Caribbean, 2017), Haiyan (Philippines, 2013), Sandy (USA, 2012), Katrina (USA, 2005), Mitch (Honduras, 1998) and Tracy (Darwin, 1974) are examples for this.

As memorable as some of these names may become, there is one name you need to remember when it comes to storm response and clean-up.  SERVPRO is the only name that can make it “Like it never even happened.”